“This year’s ‘The Shoot’, an annual clay pigeon shoot organised by my Shoot Charitable Trust, was another success – raising a staggering £240,000 on the day for two worthy charities; JDRF, the leading type 1 diabetes research charity and Maggie’s cancer centres, with each charity receiving £120,000.

Over the last 16 years, The Shoot has raised £2.94m for a number of charities and this year’s event – held at Auchterhouse Country Sports, near Dundee – attracted 41 teams of shooters and a total of 365 guests, including players from the Glasgow Warriors, comedian Fred MacAulay and celebrity chefs Nick Nairn and Tony Singh.

Drapers award winner Jane Davidson boutique and style icons Sarah Murray and Anna Freemantle-Zee provided our non-shooting guests with two fashion shows whilst Joe Stilgoe regaled them with live music and his ‘songs on film’ show. In the afternoon The Overtones performed in the Adam & Company marquee and managed to get everyone on their feet dancing.

A Mini Cooper was raffled and the live auction added to the excitement of the day, featuring items such as a Glen Scouller painting, a VIP Abu Dhabi Grand Prix package for four and a weekend retreat for twelve at the exclusive Isle of Eriska Hilltop Reserves.

We were also delighted to auction a stunning 6ft penguin sculpture which netted £16,000 and was a real talking point. Painted by Janice Aitken from Duncan of Jordanstone College of Art and Design, the ‘King of the Shoot’ is dressed like a true country gent with tweeds, a checked shirt and a shotgun. He is part of a colony that will see giant sculptures of penguins waddling through the streets of Dundee in next summer’s Penguin Parade.

The planning of The Shoot goes on all year with a team of people giving their time so generously. I’d like to give a special mention to Dundee ice hockey legend Jock McGuff, who has given up his spare time to help The Shoot take off for the past 14 years.

Jock, who played for the Dundee Rockets in the 1980s and currently plays for Scottish Alumni, was the worthy recipient of the Jim Paterson Award for kindness and generosity. For the past 14 years, he has put his skills as an electrician to good use by providing the power supply across the complex site and has never taken a penny for the huge amount of time he has put into The Shoot. He’s our trusty electrician and we would be lost without him.

As a final note, I’d like to thank all of our guests for coming along and helping raise such a wonderful amount of money for the charities – without their support, The Shoot wouldn’t be possible.” 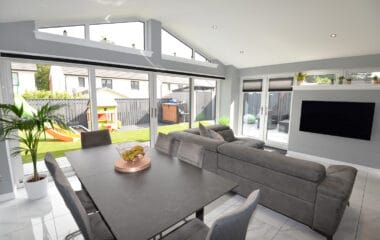 After lockdown: demand for home extensions on the rise

We’re seeing growing interest from customers looking to extend their homes, with enquiry levels for sunrooms and orangeries up 22% over last year.

After lockdown: demand for home extensions on the rise

We’re seeing growing interest from customers looking to extend their homes, with enquiry levels for sunrooms and orangeries up 22% over last year.